There's a lot of excellent dungeons out there, but in my opinion there's a bit of a shortage of towns to go along with them. So here's my take on a short and simple starting town. Just place a dungeon 2 or 3 hours away from it on foot, and you're ready to play! 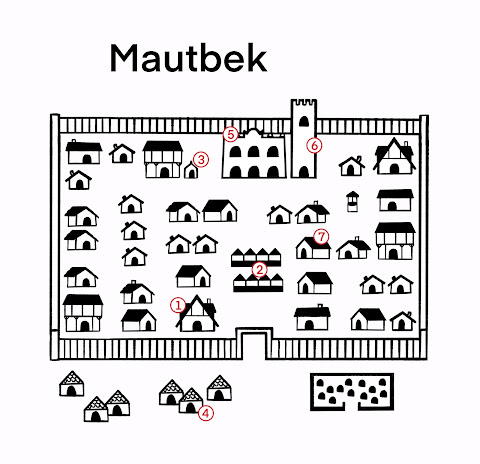 Mautbek is a small, grubby town at the edge of civilization with a population of around 200-300 souls. Since it's specifically meant to serve as a "home base" and not an adventure locale, there's not a lot going on in the way of intrigue. It's mainly just a relatively safe haven where PCs can eat, rest, and buy equipment between expeditions to a nearby dungeon or wilderness.

In Mautbek, everybody carries a dagger in their belt at all times. The streets are always muddy and the town is surrounded by a wooden palisade, outside of which there's only the town's graveyard and a few hovels. A good chunk of the townsfolk hunt bears for their pelts and meat and make torches; the rest practice stereotypical medieval trades. Trade caravans arrive from the nearest city a couple times a month, bringing food and goods in exchange for bear pelts, torches and miscellaneous crafts.

All guards & soldiers wear chainmail and carry a polearm and a sword. Most crimes are punished with death, and criminals are beheaded outside of the government palace. Since there's not much else to see or do for entertainment, most of the people of Mautbek see public executions as the equivalent of going to watch a movie or a stand-up comedy show.

•  Room & board is 5 gp per day per person. Animals bigger than a hen must also pay. Guests sleep in either of the two 20 foot-long communal beds upstairs.

•  Halana the innkeeper is a big, stocky woman who owns the inn (stats as a 1st level fighter). She serves bear ribs with rosemary sauce and watered-down beer for every meal. Rations are spicy tamales with bear meat jerky.

•  Limeach the rumour-seller spends his day drinking and talking with the guests. He will sell rumours about nearby adventure locales for 5 gp each.

•  1d6+1 desperate peasants can be hired as henchmen here (stats as 0-level commoners). 1d6 of them "restock" every 2 weeks, but the number of available recruits will never go above 7. Each one charges 25 gp per expedition/delve.

•  Open every day from sunup to sundown. Adventuring gear, weapons, armor, horses, mules and carts can be bought here.

•  6 guards (1st-level fighters all of them) keep an eye out for troublemakers and thieves.

•  There is an unlimited supply of torches available, but the availability of items like oil flasks, daggers and holy water vials is limited to 12 units per session. Horses and mules are limited to 5 per month.

•  Abiaka the know-it-all is a strange, decrepit man who lives in squalor and can identify potions, scrolls & magic items for 300 gp per item. It takes him d4 days per item. No one really knows how he does it. Some suspect he used to be an adventurer in his youth; some say that he hears voices in his head that whisper the information to him.

•  A small chapel, barely the size of a garden shed. The chapel is tended by an androgynous shrine keeper called Two-Sun. On top of a shrine inside the chapel sits a reliquary that contains a fragment of the collarbone of St. Rejavi. If one of your players plays a cleric, St. Rejavi can be a well-known cleric from their religion who died several decades ago and performed various miracles while alive.

•  Two-Sun can't cast spells, but they can pray to the ghost of St. Rejavi to perform miracles from beyond the grave, and also knows how to perform a sacred ritual that turns water that has been in contact with the relic into anti-venom potions. This process takes 1 day, and the relic can't produce any more potions for 6 days. These services are usually free for the people of Mautbek, but they have a cost for PCs.

•  Margrave Lhurg the Fretful, ruler of Mautbek, is an eccentric, gaunt man in his late 50's who rarely leaves his chamber and doesn't have any immediate family. He has recently become obsessed with collecting ancient artefacts and has instructed Wolmer, the palace's seneschal, to pay adventurers full value for any treasure they retrieve from dungeons.

•  Besides those two, the castle is also inhabited by 10 servants and 10 elite soldiers (2nd-level fighters all of them) who serve as the Margrave's personal bodyguards.

•  Land and houses are generally not for sale in town, but if the PCs manage to sell at least 14 000 gp worth of treasure to the Margrave, he will allow them to stay in the town's inn for free and will offer them citizenship.

•  24 town guards (1st-level fighters all of them) live here with their commander. Half of them are always out, some in the market and some patrolling outside the palisade.

•  The commander is a grim-looking 5th-level fighter called Reginald the Mirthful; he's also responsible for carrying out executions.

•  Specialist hirelings like animal trainers and engineers are available for hire here.

If you feel like it, roll a d6 on this table every other session to shake things up a bit in town.

1. A merchant arrives selling a map showing the location of a new dungeon.

4. The town is celebrating a feast day! All shops and services will be closed and unavailable for the next 1d4 days.

5. A gang of 10 ill-mannered ruffians has arrived in town (stats as brigands). 4-in-6 chance of antagonizing the PCs.

6. A trade caravan has been attacked by werewolves. Market and inn prices are doubled for the next d4 weeks.